The Villalago village is located 25 km to the south of Sulmona, in Abruzzo’s L’Aquila region. Housed between the spectacular S. Domenico reservoir and the pleasant Scanno lake, Villalago is an ancient Italian village that is every traveller’s dream destination. At every corner of the village, there are historic monuments that deserve your attention and the biodiversity found in natural reserves, lakes and parks are an exceptional treat to the eyes and the soul. While you are here, there can be no doubt in your mind that the village’s ‘One Of The Most Beautiful Villages of Italy’ title is truly well-deserved.

Planning to visit the Abruzzo region of  Italy? Our Villa puts you in the Centre of all things Italian in the Adriatic Coast of Italy’s Abruzzo region. Contact Daniela today to enquiry about booking your dream Italian villa.

The history of the village goes way back to the XIth century when San Domenico Abate, Benedictine monk, founded the monastery of Lago San Pietro in the upper Sagittario valley. The monastery was bequeathed to the Lords and the Counts of Valva and attracted settlers from all sides in the many villas of Valle de Lacu, called so because of its five major lakes. In time, however, with the view of guaranteeing a legitamate defence, they moved to Monte Argoneta which had the Longobarde towers and christened the place ‘Villalago’.

By late 15th century, the monastery was abandoned by the Benedictines and the Villalaghesi and they charged an anti-coloniont movment under the motto ‘Universitas contra omnes’ (which roughly translates to ‘university against all’). They charged victoriously against the Belprato Counts of Antwerp and others who sought to take possession of the whole of Valle De Lacu. While the people of Villalago refused to recognise any feudal lord, it respected the right of the Benedictines to collect censuses for the leased lands. The tenants stopped paying at some point and eventually took over as owners of the land.

When viewed from Valle Preziosa, Rosa Pinnola and other surrounding mountains, the Villalago settlement forms a beautiful, harmonious and proportionate descent towards the Argoneta mountains; arranged almost as an amphitheatre. The ancient houses found in the village typically consist of a defensive tower at the core of its circular architecture. But the major tourist attractions are its many Parish churches, medieval towers and the most-significant is, of course, the hermitage of San Domenico.

Around 1010, San Domenico, one of the most celebrated saints of Abruzzo, set up his residence in a natural cavern on the shores of a lake that will posthumously be christened Lake San Domenico in his honour. He lived in solitude for a few years conducting austere prayers and penances which earned him the admiration of the inhabitants of the place and made him the patron and tutelary deity of the region.

In the coming years, San Domenico’s retreat became a place of worship for many and a beautiful hermitage was built as a tribute to the saint. The facade of the hermitage overlooks a small portico and one can feast their eyes on the tranquil reflection of the humble hermitage in the clear waters of the artificial basin that is Lake San Domenico.

A beautiful stone portal at the entrance, built during the Renaissance era, leads to an altar that is reminiscent of the neo-Gothic style. The altar, painted in scagliola by Giuseppe Mancini (and commissioned by hermit Villalaghese Francesco Lafolla) houses the statue of the saint. At the rear of the building, there is a door that leads to a steep and narrow staircase right to the dark cavern where San Domenico once slept. The wooden beams that he slept on have been transferred to the Parish church for historical preservation after it was severely damaged by a fire accident. The hermitage being of religious significance and the only sign of the founding saint’s settlement in the village is among the most revered monuments of the region.

The Old Town Hall was built in the second half of 1800 near the church of S. Giovanni Battista. The once bell tower was converted to a civic tower and clocked in the year 1887. Currently, the building premise houses a municipal library on the ground floor and a permanent school for forest workers on the first floor. Further in 2003, a few of the rooms were converted into museums to exhibit the everyday objects and lifestyle of the people of Villalago up to recent past. The exhibits centred around the village’s recent past economic dependency on fishing, sheep farming and agriculture. These occupations, however, have been completely abandoned in modern Villalago and have been replaced with the tourism and service sector. 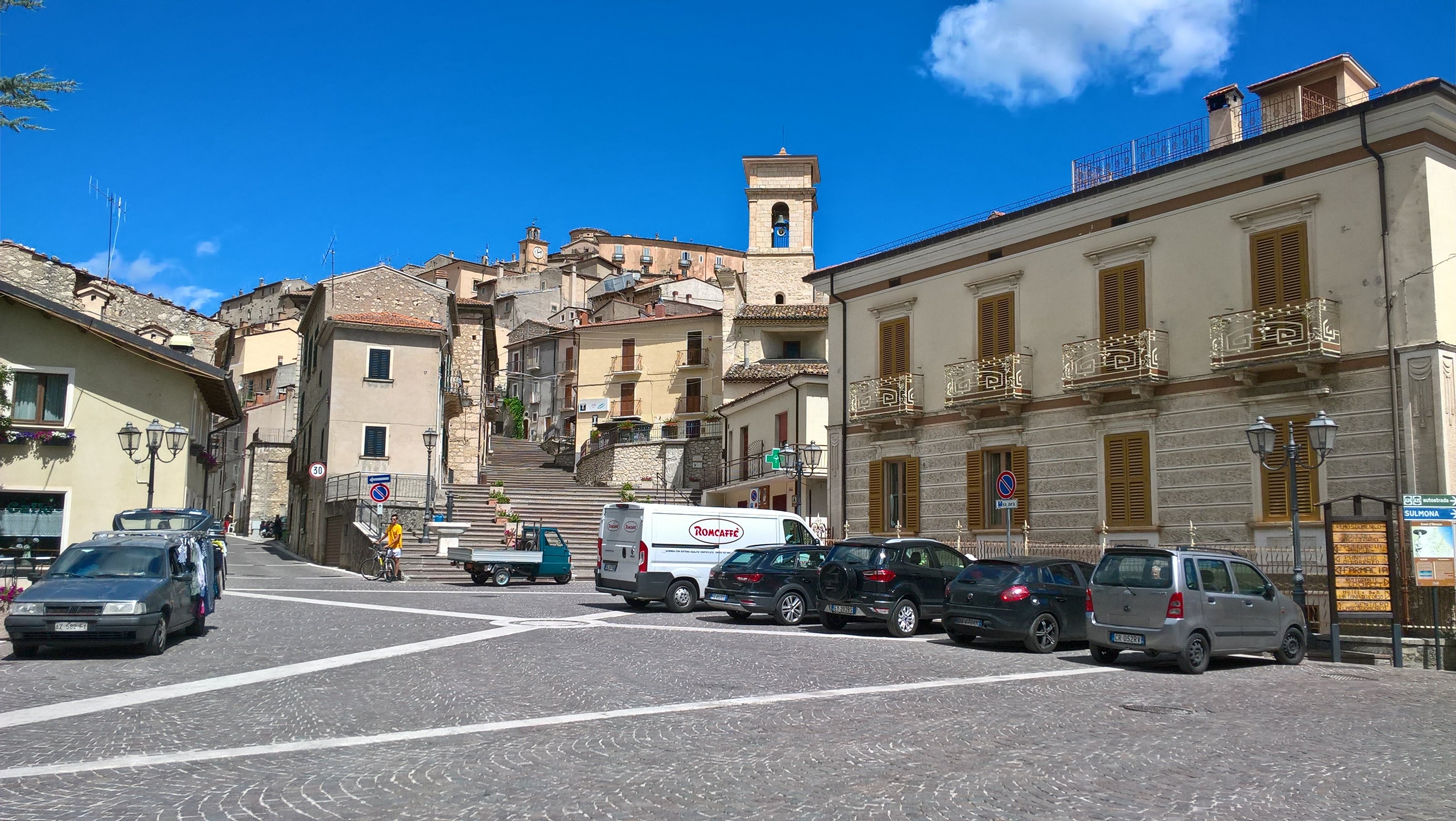 Located in the historic centre of the village, the Parish Church is among the largest churches in the region. Currently dedicated to Madonna of Loreto, it was built in remembrance of tenths Valvensi, Santa Maria Della Villa.

The church of San Michele Arcangelo all’Arapezzana is an ancient jewel of the village built by the Lombards themselves when they lived atop the Mount Argoneta.

Our Lady of the Sorrowful

At the core of the primitive Villalago, is a ‘Torrione’ or an ancient cylindrical tower that served as a prison and defensive and sighting tower during the Lombard Era.

Villalago holds the geographical centre of the high Valle del Sagittario which is characterised by a series of alternation of deep valleys and mountain ridges. Located next to the banks of Lake Scanno, Villalago shares its borders with the Scanno, Bisegna, Anversa degli Abruzzi and Ortona dei Marsi municipalities. The calm, green waters of Lake San Domenico is a favourite spot of the local trout fishermen and Lake Scanno and Lake Pio is an idyllic and scenic destination for nature-lovers. The surrounding mountains are rich in oak and beech woods and border around the famous Abruzzo National Park. The path to Monte Argatone makes for a classic mountain itinerary and provides a spectacular view of the country,Abruzzo National Park and marsica.

Nestled between several lakes and mountains, the region of Villalago is blessed with a pleasantly mild climate year-long and its environmental and territorial characteristics make it possible for the villagers and the tourists to indulge in all kinds of festivities and outdoor sports and activities.

A gamut of entertainment and cultural events make the stay at Villalago rich, vibrant and enjoyable.

Starting with The Fanoglie on the 22nd of January, when the citizens of Villalago light up devotional fires called ‘Fanoglie’ in every district of the country. The fires are lit using tall, conical wooden structures, usually made of beech, with dry twigs placed at the very top. 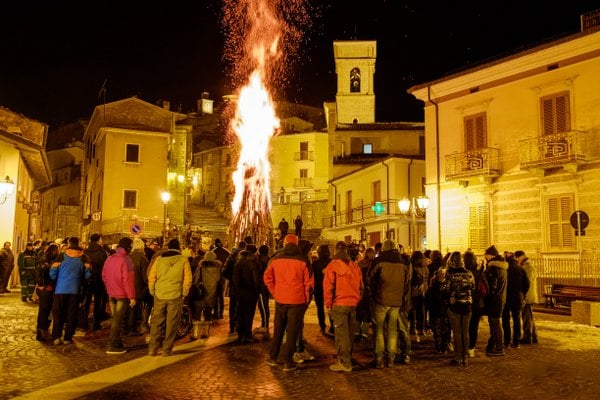 Followed by the Easter Procession, celebrated on Easter Monday, which is an honour and tribute to the life of San Domenico, the patron saint of Villalago. And in the last weeks of May, the village hosts a grand feast in honour of the bishop and martyr, Sant’Emidio.

August is the warmest time in Villalago and is also the most populated month for the village owing to the mass arrival of tourists from all over the world. The month is so popular among tourists that the village now organises ‘August Villalaghese’ or a series of yearly cultural and recreational events that leave the audiences & participants amused and exhilarated. From games, concerts, exhibitions fireworks and lotteries to film screenings and theatrical performances, the events greatly improve the quality of life in the village. From 19th to 20th of August, there is a yearly pilgrimage from Fornelli to the Hermitage of San Domenico.

And around Christmas, usually on 26th of December, Villalago hosts a one-of-a-kind event called the Underwater Crib. The event, which is covered by the national RAI TV, revolved around six statues (Three Kings, San Giuseppe, Our Lady and baby Jesus) made by the Castelli (Teramo) Institute of Art in ceramics being carried by divers on special rafts. The divers carry the raft in a setting of torches, candles and fireworks around the lake to a specific point where it will be placed at the bottom of the lake. The event is a special attraction for divers from all over Italy.