“La Merenda e pronta – su!” are words that still echo in my fond memories of spending my childhood holidays in Abruzzo, Italy. I knew it was 4pm sharp when Zia Nesia, would call me for my regular afternoon Abruzzo Food snack – I could run my watch by the timings I was called to be “a tavola”. My mid-afternoon ritual would consist of eating a ragu sauce on freshly baked bread drizzled with extra virgin olive oil and a pinch of sea salt but sometimes I would ask for a Nutella spread too -it would be one of my favorite parts of the day. I would briefly keep my aunt company in the kitchen while I would chomp away as she continued to get back to watching telenovellas on the TV “Grazie zia e buono” I would say and with her eyes glued to the Rete Quattro TV channel she would reply “mangia, mangia”.

In retrospect I realize that she must have quickly created my lovely Abruzzo merenda in between a commercial break!  Such a simple very tasty snack to make – but it took hours and hours of work to produce and care for the tomatoes and olives that went into creating my snack which continues to still grow and be cared for on her family’s land organically. My Zia is a regular on the Abruzzo Sagre circuit (Abruzzo food festivals) and has won several awards for her Abruzzo cooking magic and spending my Abruzzo holidays with a lady that knows her Abruzzo food, over the years has given me the opportunity to understand and appreciate what great food and Abruzzo food is all about.

Abruzzo Food is Italian cuisine at its Purest

Abruzzo food is regarded as Italian cuisine at its purest – why? Well the region of Abruzzo, surrounded by its famous national parks and being located between the North and South of Italy has been protected from centuries of foreign cuisine influences. For example, in the North Western regions of Italy there is an influence of French food and bordering Alto Adige, Trentino and Veneto there is an Austro-Hungarian influence. The classic bistecca alla Fiorentina and Zuppa Inglese was created for the English colony that settled in Tuscany in the 1800’s. And of course the South of Italy you will find that the cuisine has a strong Spanish and Arabic or North African influence. Not to mention that after conducting a study, Confesercenti, the Italian trade organization, named Abruzzo the best place to dine in Italy.

It comes then as no surprise that Abruzzo, in particular the small town of Villa Santa Maria, is known as the “Home of Chefs” whereby since 1560 some of worlds best Chefs have been learning to cook for Royalty and the top restaurants worldwide. Today the patron saint of Villa Santa Maria and protector of Italian cooks, San Francesco Caracciolo, overlooks Chefs that graduate from Villa Santa Maria that go on to become culinary masters, and in October there is an Abruzzo food festival celebrating Italian cooks, which is also attended by Michelin star chefs.

Abruzzo food is a mixture of different traditional taste and is also based on a number of dishes that unite them. Even today, its variety mirrors its background from a large number of Abruzzo cooking customs from years of uninterrupted traditions – it’s where the cuisine from both the sea and mountains that come alive in Abruzzo food.

The famous “Maccheroni all chitarra” is amongst the most known of the Abruzzo food dishes. The pasta dough, made of eggs and durum wheat, is cut into strips using a “chitarra” (translated literally as “guitar”). This piece of Abruzzo food equipment is made up of a wooden frame, strung with parallel steel strands and by pushing the sheets of pasta dough through with a rolling pin, the characteristics shape of chitarra is obtained. Chitarra is served with various Abruzzo sauces to include: pork, goose, or lamb ragout.  This culinary triumph also has an Abruzzo side dishe, “sagne e faggioli”, bean soup with traditional thin pasta noodles made from flour and water, flavored of a thin sauce made from fresh tomatoes, garlic, olive oil and spicy pepper.

Amongst the other known Abruzzo food dishes, include “gnocchi carrati” from L’Aquila, flavored with bacon, eggs, ewes-milk cheese. From Teramo, a town famous for Abruzzo food, comes “Scripelli” crepes served “Mbusse” (in a type of Abruzzo soup) or used to form a sumptuous soufflé dish, served with a little ragout, and stuffed with chicken liver, meat balls, hard boiled eggs and a fresh ewe’s-milk cheese.

Abruzzo food can be quite particular too as Ravioli can also be stuffed with sugar and cinimon, served with thick pork ragout. The “Pastuccia” on the other hand is a stew of polenta that is served with sausage, egg and grated ewe’s-milk cheese; and “pappicci”, thin pasta noodles in a tomato sauce.

Abruzzo food main courses consist principally of meat when inland or fish on the coast. Roast lamb, a tasty rustic dish, has several variations such as “arrosticini”, thin wooden skewers with pieces of lamb, cooked over an open fire and often served with bruschetta –  which is roasted bread rubbed with garlic and topped with extra-virgin olive oil, salt and pepper and can also have toppings to include chopped fresh tomatoes and many other variations. 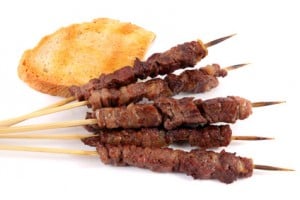 “Pecora al cotturo”, lamb is stuffed with a rich variety of mountain Abruzzo herbs cooked in a shepherds copper pot; lamb cooked whole in the bread oven on important days; and finally “agnello cacio e oro”, a tasty rustic fricassee.  The origins of the Abruzzo food meat dishes derive from the shepherds, thus they often have a wild touch to them to include wild boar – animals from the courtyard, fried or roasted rabbits or chickens with garden vegetables flavourings and a never-ending variety of tastes. Some Abruzzo cuisine dishes are more refined such as the “canzanese’” from the Teramano area, which is a cold Abruzzo dish made with gelatine.

The variety of fish from the Adriatic has resulted in 3 basic “brodetti” (broth) variations with the centers of Abruzzo sea food from
Pescara, Giulianova and Vasto. Excellent sauces come cooked in an earthen ware cookery pot with fresh Abruzzo tomatoes and various Abruzzo spices, rich with the smells of the sea, with a final touch of spicy pepper. Of course, also popular are dishes cooked with clams or mussels. Another inevitable Abruzzo food dish is the rustic pizzas, from the Easter Pizza (a rustic cake with cheese and pepper from the Teremano area), to “fiadoni” from Chieti, dough of eggs and cheese well risen, cooked in the oven in a thin casing of pastry, to the omnipresent rustic tart, often enriched by a casing of pastry and filled with everything imaginable: eggs, fresh cheeses, ricotta, vegetables, with all the flavorings as spices that the mind can only imagine.

The spreadable sausage from Teramano, flavoured with nutmeg, the liver sausage from the mountains are also renowned Abruzzo food. Tasting of garlic and spices, all the wonderful “ventricine” from the High Vastese, large pieces of fat and lean meat from the shoulder and ham, pressed and matured with powdered sweet peppers and the scent of fennel and pepper in the stomach of the pig itself. Ewe’s-milk cheeses and mozzarella cover the valleys and hills, from the famous ones of Atri and Riviondoli to the great numbers of lesser known ones, fresh or seasoned. Abruzzo sweets are famous throughout the world – which include the sugar coated almonds (confetti) from Sulmona and the Terrone (Nurzia), soft chocolate nougat from L’Aquila and the “Parrozzo” from Pescara made from the wonderful mixture of crushed almonds.

While these are made by confectioners traditional home-made Abruzzo desserts include “Ferrtelle”, aniseed waifers cooked in a red-hot plier with large stepped teeth, the “sicerchiata”, balls of fried dough joined into ring shapes by cooked honey, the “croccante” a type of nougat made with almonds and caramelled sugar,  flavored with lemon, the “mostaccioli” substantially biscuits sweetened with cooked must; the “pepatelli” from Teramono, biscuits of fine bran almonds and honey; from Guardiagrele come the heavy macarones and the airy “Sise delle manache”, triangular pieces of sponge with confectioners cream; from Lanciano the “bocconotti” with stuffing of almonds and chocolate: the list of glutton is never-ending.

Since the 60’s after having been “DOC” recognized, Abruzzo’s wines have become progressively prominent in the world. The wines that boast DOC, derive from 2 vineyards, the Montepulciano and the Trebbiano, perfectly acclimatized to the Abruzzo region and the Adriatic climate.

Montepulciano d’Abruzzo is a full-bodied red wine,  young, lively and robust, matured it acquires an noble and perfumed austerity.

The Cerasuolol wine is a little cherry red (not a rose’) sapid and scented, obtained by scraping the top of the Montepuliciano during fermentation. A true temperature it is a good accompaniment with first courses and poultry; called it is excellent with thick fish soups.

The Trebbiano d’Abruzzo has a dry white wine, acidulous and fruity, often considered to have more body then its northern ancestors. It is particularly suitable for fish – hors d’oeuvers, roast, fried foods and clear soups; and is also perfect for first dishes such as soup, light main courses, mixed fried foods and cold meat and aspic.

There are two Abruzzo liqueurs that must be mentioned, the Centerbe Tocco Casauria, an ancient recipe with a high alcohol content, used as a digestive, produced with herbs that grow on the Maiella; and the L’Aurun di Pescara, and exquisite sweet orange liqueur to be tasted only with macaronns or ice-creams

In Abruzzo, whether you are cooking in or dining out you will always have a wide choice of Abruzzo food to choose from and as Abruzzo is not overrun by tourists, dining out means it is always usually top notch and priced reasonably in comparison to other heavily touristic destinations in Italy. Here are just some of the most common Abruzzo dishes you may come across:

But cooking Abruzzo food in my aunt’s eyes is not only about traditional Abruzzo cuisine, but about creativity and knowing when to use the right ingredients. Here is one of my favorite dishes that she cooks:

(The Sheppard’s Pasta) which are rings of fresh pasta with a sauce, both traditional of the Abruzzo region. The recipe is as follows:

– Ricotta cheese (made from sheeps milk)

Chop the vegetables (courgettes, eggplant and bell pepper) into 3mm cubes and fry them lightly in some olive oil.

Chop the carrot, onion and some bell pepper into tiny cubes and fry in a generous dose of olive oil. Once they have become a light golden brown add the tomatoes and a pinch of salt and let it cook for approximately 10 minutes.

Boil the pasta rings in a big pot of salted water for approximately 10 minutes.

When the pasta is ready add the vegetables and sauce and mix all together. Then crush the Ricotta cheese with a potato masher and sprinkle on top of the pasta.

Since you reached this far you may wish to see a lovely movie about 2 chefs in Abruzzo.