It is almost impossible to run out of Abruzzo destinations to visit, especially if you are adventurous and curious type. The region may be rich in breathtaking cities, mountains, coastal areas, and wine trails, but that does not mean you should miss out on small towns, like Campli, a commune and town in the Teramo province. It is in the Gran Sasso e Monti della Laga National Park, which is predominantly mountainous and home to alpine plains. The town’s history mentions Nicolaus Ricii de Nucella Campli, a composer that was presumably born near or in the town itself. Another notable aspect of its past is when it was captured by France in 1557 under Francois de Guise when he failed his campaign in the Kingdom of Naples against the Spanish. 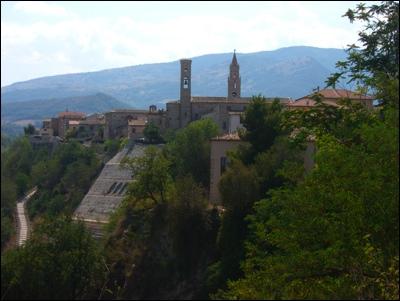 Campli is easily one of the must-see Abruzzo destinations, especially around August for the Sagra della Porchetta Italica. The Feast of Italian Pork is being celebrated annually since 1964, and it is considered as the first of its kind that is established and organized in the region and Italy respectively. Fernando Aurini founded the festival in his attempt to attract more tourists and spread more information on the town, which once a part of the holdings of the Farnese family. Every year, a practical tourist guide called ‘Campli’ was published every year, and the festival became successful in drawing up crowds. Back in the mid-1960s, around 10,000 visitors attended the event. If you are attending this festival, be sure not to miss the pork sandwich cookoff.

Some of the top Abruzzo destinations are in Campli. The Farnese Palace, which dates to the 14th century, is home to the National Archaeological Museum (Museo Nazionale Archeologico). If you are looking to seen high medieval and ancient Roman stone fragments, be sure to visit the Church of Saint Peter where you can find those on its walls. La Scala Santa (The Sacred Step) is a must-see among Abruzzo destinations related to Pope Clement IV. With 28 wooden steps, it is believed that climbing it on your knees will bring absolution to your sins.

Are you planning on exploring Abruzzo towns and medieval villages like Campli? Contact Daniela today to enquire about booking your dream Italian Villa. Our Villa puts you in the centre of all things Italian in the Adriatic Coast of Italy’s Abruzzo region.